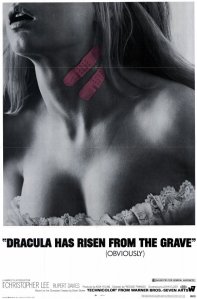 And don’t forget, my book IN THE SPOOKLIGHT, a collection of 115 horror movie columns, is available from NECON EBooks as an EBook at www.neconebooks.com, and as a print edition at https://www.createspace.com/4293038.

Have you heard the news?

Dracula Has Risen From the Grave.

I love that title.

DRACULA HAS RISEN FROM THE GRAVE (1968), Hammer Films’ third entry in their famous Dracula series, was so successful at the box office, it sent Hammer on a crazed vampire movie spree between 1968 -1973 where they made an unprecedented 11 vampire films in five years, including four more Dracula films with Christopher Lee, three vampire movies with Peter Cushing, including TWINS OF EVIL (1971) and THE LEGEND OF THE SEVEN GOLDEN VAMPIRES (1973), and four without either star, including the very popular CAPTAIN KRONOS: VAMPIRE HUNTER (1973).

Vampires never had it so good.

DRACULA HAS RISEN FROM THE GRAVE is a revenge tale, as most of the Hammer Draculas were.  Seems Drac had nothing better to do than get back at people.  You’d think that a guy who was immortal— well, anyway.  A monsignor (Rupert Davies) and a village priest (Ewan Hooper) attempt to stamp out the evil of Count Dracula once and for all by reading a prayer of exorcism and sealing the castle door with a cross.  The cowardly village priest flees in fright but slips and falls, smashing his head on some ice.  Underneath this ice rests Dracula (Christopher Lee), frozen there since the end of the previous installment in the series, DRACULA- PRINCE OF DARKNESS (1966).  Blood seeps through the ice onto Dracula’s lips, reviving him, and presto!  The count has risen from his icy grave!

Dracula makes the priest his slave and vows revenge against the monsignor for placing the cross on his castle door.  Of course, one wonders why Dracula just doesn’t order his new slave to take down the cross himself.  It would have saved him a heck of a lot of trouble!

Lucky for Dracula, the monsignor has a beautiful niece, Maria (Veronica Carlson) and so the Count gets to throw in a few hickeys as part of his revenge plot.  It’s up to the monsignor and Maria’s atheist boyfriend Paul (Barry Andrews) to save the day.

DRACULA HAS RISEN FROM THE GRAVE actually has a better than average script, so screenwriter John Elder deserves credit for penning a very enjoyable story, with very likeable characters.

Director Freddie Francis scores well here.  It may be his best directing effort for Hammer.  He crafts several exciting scenes, including not one but two rooftop chases, and an extremely memorable “stake in the heart” sequence in which Dracula actually rips the stake from his own heart. I told you it was memorable.

The performances are all first-rate.  Character actor Michael Ripper delivers one of his best performances, as Max, the baker and tavern owner.  Say what you want about Christopher Lee, today famous more for his longevity than for his acting ability, but he makes a terrific Dracula.  You cannot take that away from him, and with another actor in the role, the Hammer Dracula films just wouldn’t have been as good.  Lee captures the essence of undead evil in a way that causes you to remember his performance long after you’ve seen it.

DRACULA HAS RISEN FROM THE GRAVE also boasts amazing sets.  They look like they’re from a major Hollywood studio.

DRACULA HAS RISEN FROM THE GRAVE is a keeper, a natural crowd pleaser.

From its opening moments with a bloody corpse stuffed inside a church bell, to its bloody finale outside Castle Dracula, it won’t let you down.

But a word of warning- this winter, watch your step on the ice.  Should you slip and fall, you-know-who might be resting underneath.