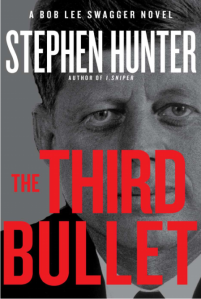 What I’m Reading – The Third Bullet By Stephen Hunter

I picked up The Third Bullet, a Bob Lee Swagger novel— he’s the main character— by Stephen Hunter because there was a big photo of JFK’s face on the cover, and this being the 50th anniversary of the JFK assassination, it caught my interest.

More so, its story, the tale of a former Marine sniper who solves the JFK assassination, sounded so compelling I just had to read it.  That being said, within the first few pages, I almost put it down, for good.

The initial prose by Hunter was difficult to get through at first, not because it was poorly written, but because like the hero in this novel, it was tough to tackle.

Take the opening lines of the book, the first three paragraphs:

The sidewalk before him bucked and heaved, blown askew by high winds howling through the night.

Oh, wait.  No.  Let’s edit that.  There was no bucking and heaving.  Ditto with the “blown askew” and the “high winds howling through the night.”

It just seemed so to Aptapton, because the winds that toyed with the stability of the sidewalk blew— “howled”— only through his own mind.  They were zephyrs of vodka, and they’d substantially loosened his grip on the solidity of the little chunk of earth that lay between the bar he’d just exited and the house where he lived, a few hundred yards ahead.

Bad writing?  Not really.  It’s creative and clever, but it’s almost a case of being too creative and clever as I found myself stopping to think about the actual prose rather than following and more importantly enjoying the story.  There are lots of moments like this throughout the hefty 480 page novel, moments where the writing seemed to get in the way of the story.

But in the end this doesn’t really matter, because The Third Bullet  tells a heck of a story, and Bob Lee Swagger is a very compelling character who easily held my interest throughout the novel.

The Third Bullet is one of those novels where the less said about the plot the better.

In one of the more understated openings to a thriller you’ll ever find, Bob Lee Swagger accepts an invitation from a woman who seeks out his help because her author husband had recently been killed by a hit and run driver.  She finds this odd because her husband had been working on a book somehow connected to the JFK assassination, and he had told her that he believed he had solved it.  She admitted to Swagger that she had been only half-listening to her husband, but off he went to Dallas, did some investigating, and the next thing she knew he was dead.

Swagger fully expects to dismiss the case, but something the woman says, an additional seemingly minor detail, strikes a chord and a light bulb goes off, and the next thing he knows Swagger is conducting his own investigation into the JFK assassination.

Where the search takes him ultimately leads to an amazing yet surprisingly credible story.  Author Stephen Hunter has done his homework, and the theory he presents is so believable I easily bought into it.

For example, one of the sticking points that Swagger has with most of the conspiracy theories is that the JFK route through Dallas was only conceived and announced days before the assassination.  How could anyone plan such an operation with such precision to be able to pull it off in less than a week’s time?  And the answer Hunter comes up with is clever and satisfying.

I had more difficulty buying the reason these folks decide to kill the president.  To me, it was a bit of a stretch.

My favorite part of The Third Bullet is the character of Bob Lee Swagger.  This was my first Swagger novel— there have been two previously— and I’d easily read more stories with this character.  He’s incredibly smart, and he’s relentless.  He’s in his 60s yet he more than holds his own against much younger much stronger men.

Plus in this story he goes up against a CIA mastermind, a man so ingenious he pulled off the JFK assassination and got away with it.  Yet, Swagger is up to the task.  It all makes for a very exciting novel.

Hunter is obviously a gun guy.  The details of specific guns, gun culture, and what these guns are capable of, are all encompassing.  It’s extremely well-written, but sometimes it’s a bit much.

However, in this case, the gun specifics play a major part in how Swagger solves the JFK assassination, which lends more credibility to the story.  For example, the third bullet did something it shouldn’t have done:  it exploded, and we see it explode in the now infamous Zapruder film.  Hunter is able to explain with confidence how and why this was possible.

I liked The Third Bullet a lot.  It’s not always an easy read, as the heavy prose tended to get in the way of the story, but what a story, and that’s what makes this novel such a compelling read.  I didn’t jump on board immediately, but by the third chapter or so, I was definitely into this one, enjoying the ride, going along with Swagger as he infiltrated the ugly events which led to the assassination on that infamous day in Dallas in 1963.

And I believed it all.  Bob Lee Swagger is a very convincing character, even though he does some pretty unbelievable things.  And the villain, who’s living in the shadows, is also a neat character.  Hunter spends a lot of time on this guy, and he writes whole chapters from the villain’s perspective in first person.  It’s an interesting take, and it works.

The actual plot is a real page turner, and the further along I read into the novel, the more I wanted to read.

The Third Bullet is not quick read, nor is it an easy read, but it sure is a satisfying one.

Once it gets going, it’s a helluva ride.