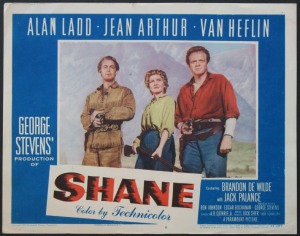 They sure don’t make them like they used to.

SHANE (1953), the classic western from director George Stevens, has “four star” movie written all over it, from its exquisite Oscar-winning cinematography to its larger than life performances, it’s a movie with a grand vision that has as much to say today as it did over 50 years ago, perhaps more so.

It’s the wild west, Wyoming to be exact, in the years following the American Civil War, after the Homestead Act, when a man named Shane (Alan Ladd) arrives at the farm of Joe Starrett (Van Heflin), his wife Marian (Jean Arthur) and their young son Joey (Brandon De Wilde).  The family immediately warms up to Shane and invites him to remain on their farm as a worker, and he agrees.  Shane is a gunslinger running from his past, and so he welcomes the opportunity to join the Starrett farm and enjoy a new lifestyle.  Young Joey quickly idolizes the former gunslinger.

But all is not right in their little world.  A rather brazen bully of a man Rufus Ryker (Emile Meyer) wants to buy Joe’s land, as well as the farms of Joe’s fellow homesteaders. When they all refuse to sell, and Rufus’ bully tactics continue to fail, he hires notorious gunman Jack Wilson (Jack Palance) to take his fight to the next level.

Joe is a stubborn man and a proven leader, and in spite of the presence of a murderer like Jack Wilson, remains steadfast in his determination to keep his farm, and he pleads with his neighbors to remain firm with him as well.  But when blood begins to flow, all bets are off, and it’s at this point that Shane realizes he can’t run from his past any longer, because it’s up to him to protect his friends.

Sure, this plot is nothing we haven’t seen before, but SHANE isn’t only about plot.  It’s also about presentation.

The cinematography by Loyal Griggs, which won an Oscar in 1954, is epic.  The colors, the landscape, the characters, are all captured as larger than life.

SHANE was directed by George Stevens, one of the all-time great movie directors, and many consider SHANE to be his masterpiece.  It’s hard to disagree with this assessment.

The thing that stands out the most for me about SHANE, which I recently caught up with on streaming video the other day, is how strongly this film makes its case for violence as a last resort.  Now, I prefer my westerns dark, and I enjoy violent action movies as much as the next guy, but there was something exceedingly refreshing about this movie’s approach to violence.  Screenwriter A.B. Guthrie Jr. hammers the point home that fighting is one thing, but bringing a gun into the mix is quite another.

Early on, bully Rufus Ryker makes it a point to say in his defense that he uses fists to settle his disagreements, and will not resort to guns.  He wants no trouble with the law.  Later, when he finally breaks down and hires gunslinger Jack Wilson, he makes sure that witnesses see that it is Wilson who is doing the shooting, and not him.  Also, Wilson baits his victims so they draw first, allowing him to claim he was shooting in self-defense.

When Shane teaches young Joey how to handle a gun, Marian scolds Shane and tells him her son will not grow up in a world of guns.  Shane tells Marian that a gun is a tool, to be used like other tools, and that a gun is no better or worse than the person using it.

SHANE is not an anti-violence movie.  There are plenty of fistfights, and eventually when the guns come out, there is bloodshed.  SHANE simply adds some thinking to the mix, and as such, its approach towards gun violence is a breath of fresh air compared to what we see in the movies today.  Imagine, actually thinking about and realizing that a bullet will end a man’s life forever.  Imagine Sylvester Stallone, or even Clint Eastwood for that matter, preferring not to kill his adversary.  That being said, Shane is not a pacifist.  He’s a murderer, and he’s just as deadly as the next guy, except he’d rather not kill if he could help it.  Trouble is, he lives in a world where turning the other cheek isn’t really an option.

Alan Ladd is perfectly cast as the gunslinger who’d rather be a farmer, and his laid back persona is charming as he provides a steady helping hand for the Starrett family.  While Ladd turns in a decent performance, he doesn’t provide the best performance in the movie.

I actually prefer Van Heflin as Joe Starrett.  The man is a rock, and even when the bullets start to fly, he refuses to back down.  One of my favorite scenes in the movie is when Starrett decides he’s had enough and he’s going to face Jack Wilson.  Shane tries to convince him that he’s no match for Wilson, but Starrett has too much pride and refuses to give in.  In order to stop Starrett from facing Wilson, Shane has to fight the man, and the two friends literally kick the living daylights out of each other in one of the film’s most rousing moments, a hand to hand battle for the right to go up against Jack Wilson.

During this scuffle, director Stevens includes shots of the farm animals going ballistic and freaking out as the two men beat the stuffing out of each other.  There is a general sense that all is wrong with the world at this moment.

Jean Arthur is fine as Marian in her final movie role, and it’s hardly noticeable that at 50, she was considerably older than either Van Heflin or Alan Ladd.

My personal favorite performance in SHANE belongs to Jack Palance as Jack Wilson.  As the gunslinger who wears black, Palance is oh so creepy.  He has very few lines of dialogue, and everything is understated about him, but he has such a commanding deadly presence, he gets under your skin.  And when he does speak, his words cut like a knife slitting a throat.  It’s a deliciously evil performance.

But the actor who steals the movie is young Brandon De Wilde as Joey.  I simply can’t imagine SHANE without De Wilde with his ever so wide eyes crying out “Shane!  Shane!”  Seriously, the kid steals every scene he’s in, and he’s in a lot of scenes.  Tragically, De Wilde was killed in car accident in 1972.  He was 30.

Emile Meyer makes a sufficiently villainous Rufus Ryker.  You just want to kick this guy in the butt.

Also in the cast is Ben Johnson as one of Ryker’s heavies Chris Calloway, who eventually grows weary of his boss’s heavy-handed ways and provides Shane with some valuable information later in the movie.  Johnson made a ton of movies, but I always remember him from one of his early roles as the gorilla-lassoing cowboy Gregg in MIGHTY JOE YOUNG (1949).

John Dierkes plays Rufus’ equally cold-hearted brother Morgan.  Dierkes you might remember had a small but noticeable bit as Dr. Chapman in Howard Hawks’ THE THING FROM ANOTHER WORLD (1951).

There is a strong sense of sincerity in SHANE that is refreshing. It’s why all the characters work so well, and why the story, just an average one, soars, because everyone in the film is solid and true, and nearly everything they do is believable.

It’s also not predictable.  By the time the film reaches its explosive climax, the fate of its characters remains uncertain.  When Shane rides into town to face Jack Wilson, the movie has done such an admirable job building up character and tension, you really don’t know who is going to come out on top.  Will Shane be gunned down in front of little Joey’s eyes?  Or does he have enough left in him to be that much faster than the swift and deadly Jack Wilson?  For a film that plays it light with the violence, it lays it on heavy with the suspense.  I wish more films today would follow this formula.

While SHANE won the Oscar for best Cinematography in 1954, it was also nominated for Best Picture, Best Director, Best Screenplay, Best Actor in a Supporting Role for Jack Palance, and Best Actor in a Supporting Role for young Brandon De Wilde.  Either one of these actors could easily have won.  Who did win Best Supporting Actor that year?  The nod went to Frank Sinatra for his work in FROM HERE TO ETERNITY (1953) which also won Best Picture and Best Director (Fred Zinnemann) that year.

SHANE is a classic western that entertains from start to finish, and what it has to say about guns and violence is more apropos today than ever before.

Yup, they just don’t make them like they used to.