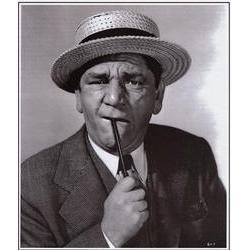 In my recent review of 42, I mentioned that Harrison Ford had never looked worse, which was a good thing, because he really nailed the role of Brooklyn Dodgers owner Branch Rickey.

But as I sat there in the theater watching Ford’s impressive performance, I couldn’t help but think that this guy looked awfully familiar.

And then it dawned on me where I had seen him before.  Ford’s Branch Rickey resembled another famous less-than-attractive celebrity, Shemp Howard.

There was one expression in particular which Ford made in the movie, a goofy expression with his lips pursed and slightly downturned, which really nailed Shemp’s visage.

Take a good hard look and decide for yourself.